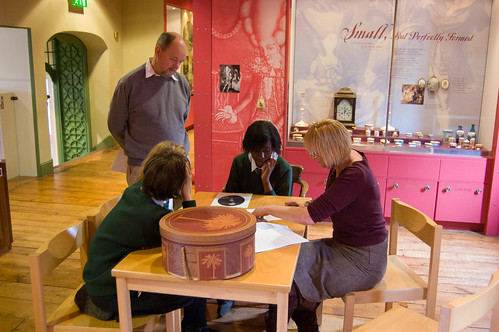 Wolverhampton in 1850 was the scene for a bitter strike by the tin-plate workers at Perry’s japanning factory. Now striker Joseph Beddoes returns from Scotland, where he fled to escape the threat of arrest.

Joseph’s first step is to see his sister, Mary, who is a maid to the influential Bantock family. No sooner has he arrived than two japan masters Loveridge and Perry also arrive to visit Bantock.

Will Joseph and Perry come face to face, and if so, what will happen? Will Mary get the sack for allowing an interloper into the house?

The Man From The Works is a 30 minute, comedy drama, for 10 to 13 years olds. It was performed as a site-specific, half-hour, professional production, followed by one hour workshops with cast in costume/character, with Arts Council funding. from 7th to 15th November 2007, at Bantock House Museum.

A specially adapted version lasting 15 minutes for children to perform script in hand during educational visits to the museum was piloted in February 2008 and is available for performance during school visits.