A is for Archives is for seven to nine year olds/Key Stage One. 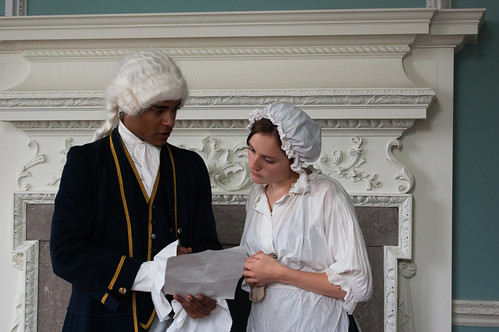 It is one of two short plays which were commissioned through MLA funding as part of a project to introduce primary school children to the work of Wolverhampton City Archives.

In A is for Archives, George and Poppy introduce 7 to 9 year-olds to the wonders of archives with the help of two very special friends.

Polly is a typical servant girl of the 1780s and George is the slave or servant of the Molineux family. They will both have lived and worked in the very house the children are visiting. They also appear in George John Scipio Africanus, which is for 9 to 11 year-olds.

This short piece is full of fun and interaction with the audience. It uses simple archive sources like the 1750s map of Wolverhampton, so that the children can come away confident that they know something about archives. They will also find out about a real person, George John Scipio Africanus, a rather extraordinary young man. Oh, and Polly!

The play was performed, with supporting one hour workshops, in the Rococo Room of the Molineux Hotel between 29th June 2009 and 5th July 2009.

The research and professional cast and director were supported by the former Museums Libraries and Archives Council (MLA).